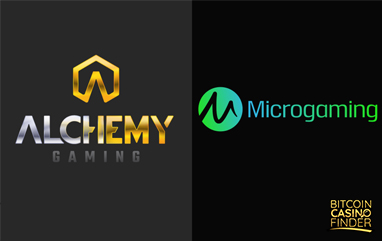 Microgaming continues to build up its network of independent gaming studios. This week, a new partnership is in the works. Alchemy Gaming joins the software provider in their future endeavors and title releases. Alchemy is the 10th addition to the brand’s independent partnerships, following the recent separate acquisition of Neon Valley Studios, Gameburger Studios, Pulse 8, and All41Studios.

Coleman will be working together with Rory Harpur, Alchemy Gaming’s head. Harpur claims that they aim to provide balanced game mechanics and excellent audiovisual features to Microgaming’s future titles.

Alchemy Gaming is relatively new in the fiat and Bitcoin casino gaming industry. But with Microgaming’s guidance, they can reach greater heights in no time. And to achieve that, both companies now plan to release their first collaboration next year.

The company debuts its new fiat and Bitcoin slots game under Microgaming. It’s inspired by the famous tales of Arabian Nights. The game, called Wheel of Wishes, joins Microgaming’s portfolio of jackpot games next year. It offers huge payouts alongside smash hits like Mega Moolah, Mega Moolah Mega, King Cashalot, and Major Millions. If we were to count, the developer’s network of progressive slot has rewarded lucky players of more than €1 billion jackpot prize since 1999.

From the teasers, Wheel of Wishes will introduce a WowPot feature and a set of exciting rewards with huge payouts. The layout remains unknown, but online casino enthusiasts attending the SiGMA 2019 in Malta may catch sight of the game. Microgaming set Wheel of Wishes as its backdrop on their exhibit at the gaming expo. The game officially goes live in the first quarter of 2020.