Halfway Through April: Top 5 Cryptocurrencies On Their Peak States 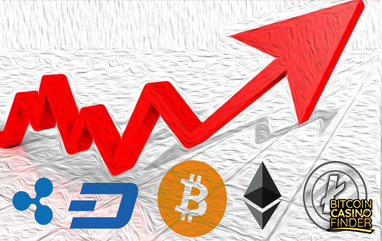 Price fluctuations in cryptocurrencies exchange rate are driven by many factors, therefore, holders and investors need to keep up with the abrupt changes lest it turns into a bad investment. People who often use it for products and services online, for example, needed to follow the peaks and the lows for buying and selling of cryptocurrencies.

Surprisingly, this week’s good news is filled with heights and peaks. After spending months in low price rates under the cryptocurrency market, all digital coins finally found their worth. In fact, according to Coin Market Cap and other analysts, last week’s revenue of these coins increased the value of the entire industry up to US$333.4 billion—equating to almost 12% gain.

Bitcoin (BTC) – the most popular and widely used digital coin today has a 3% increase over the last 24 hours on Saturday and Sunday. On Monday, unexpectedly, it was priced at US$8,268 per coin. Bitcoin then gained a market capitalization of US$140.4 billion and it still cost more than US$8000 per coin this week.

Ethereum (ETH) – the modified version of Bitcoin’s features, Ethereum, also increased last week. The price went as high as US$523.29 per token with a 3.7% increase during the period. This grants Ethereum a market capitalization of US$51.7 billion, almost twice as low as Bitcoin’s but the increase rate is high enough for investing. Some speculate that Ethereum’s increase was due to the release of Golem, an application or a peer-to-peer market that puts a computer’s excess CPU power to use for other people.

Ripple (XRP) – For Ripple, the world’s first digital fund that supports tokens representing fiat currencies, cryptocurrencies, and other commodities, the price remains high. It has an increased rate of up to 5.5% since last week, with an exchange rate of 67.3 U.S. cents. This outstanding gain gives Ripple a massive market capitalization of US$26.3 billion. Analysts speculate that the boost was due to Santander, a Spanish Bank, launching an international money transfer platform using Ripple’s technology.

Bitcoin Cash (BCH) – the hard fork of Bitcoin received a warm welcome from all cryptocurrency users and online gaming operators since the release of Bitcoin Cash in 2017. Bitcoin Cash’s price reached over 4.5% increase rate last weekend with a US$774.77 exchange rate per token. All were surprised that it surpasses Bitcoin’s market capitalization by US$13.2 billion.

Litecoin (LTC) – the most-beloved coin of former Google employee, Charlie Lee, gained a 2.5% boost. Litecoin now cost US$130.55 per coin and has a market capitalization of US$7.3 billion. Aside from price boosts, Litecoin also gained a spot in the world’s top 5 largest cryptocurrencies. It seized the 5th place from EOS coin.