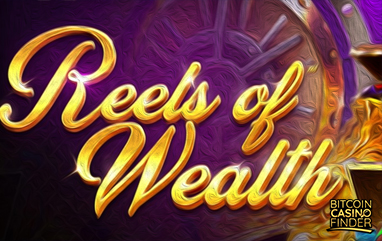 Betsoft Gaming is owning the fiat and Bitcoin casino software playing field with their new product, Reels of Wealth. This new, multi-layered 5×3 slot game gives you more ways to win bitcoins as it takes the traditional and proprietary ‘Trail System’ to the next level.

Dan Cooper, Head of Product Development at Betsoft, further explained the product launch by stating: “Our goal with Reels of Wealth was to create an immediately captivating game that also had considerable depth. With re-spins, rolling wins, and a common symbol set, the base game is seriously inviting, with the potential for significant wins. But the MEGASTAR mode – essentially a game-within-a-game–opens up even more opportunities, with four different jackpots, and a totally unique player journey powered by our in-house ‘Trail System’.”

With that being said, players should already know what’s in store for them. By far and without a doubt, Reels of Wealth is the most exciting game of 2018 to hit fiat and Bitcoin gaming portals (Bitcoin casino review). And as an innovation of the traditional Betsoft Gaming Product, the new Bitcoin slots title showcases clearer and more compelling symbols and mechanics in the game.

Reels of Wealth provides a series of progression when players jump in to collect different bonus features and distinctive symbols. Expect to see gemstones, gold bullion, piles of paper currency, heaving sacks of valuables, and massive chests full of gold. Furthermore, expect a potent paytable that rewards lines from left to right, right to left, and center outwards. All are multiplied by the player’s current bet line.

By the time you understand the basic mechanics of the game, advance to the next level and it reveals a treasure cache with more mechanics and fully-featured mini-games. The game evolves to a whole new dimension where every winning line in the base game is equal to 1 free re-spin. Win consistently, pile up your rewards (from 3 consecutive wins onwards), and get a multiplier of up to 3x every subsequent win. Take note that the wins include one or more wild symbols and an additional multiplier of up to 4x. For a chance to double the final payout, players can go all in or bet half of their winnings on the Heads-or-Tails Double-Up game feature.

PC and Mobile users will be pleased to know that Reels of Wealth was developed by Betsoft Gaming for cross-device compatibility using the Betsoft SHIFT platform. This means that players and their operating systems shouldn’t be overwhelmed with the graphics and in-game features of Reels of Wealth as it was designed to reduce file sizes, speed loading, and enable new experiences like the Trail System. It is guaranteed that whatever platform the players use, they will experience the same, exciting game.