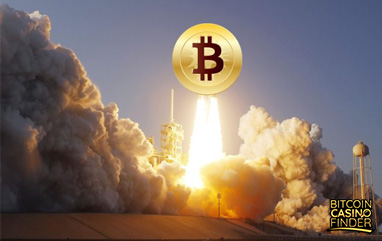 It’s as if Bitcoin did not rest after blasting past the $9,000 mark and it’s on its way to reaching $10,000. After the Thanksgiving weekend, many Bitcoin users expected the price to decrease. Instead, it’s price rose up and continued its trend after showing no signs of slowing down. More than that, this urged more people to look into detailed Bitcoin guide pages.

The single day where hundreds of physical and online retailers give big discounts on anything you can find–books, appliances, TVs, clothes, and everything else–falls on Thanksgiving. But, people did not only take advantage of the crazy discounts and deals. Coinbase reports that they recorded 100,000 newly registered users during the Thanksgiving weekend, which may suggest a growing preference in Bitcoin investments over other purchases during the time of the year.

Bitcoin’s rally to the 9k mark was pushed by one of the largest volume trades by Bitcoin Exchanges in Asia, Bithumb and Bitfinex. It’s also worth mentioning that similar to Russia and Japan hinting their interest in regulating Bitcoin, another Asian country, the Philippines are reportedly ‘discussing the approval and licensing of digital currency’ which will be supervised by the country’s central bank. Bitcoin has helped process many financial transfers of remittances from overseas Filipino workers (OFW) to their respective families. And if the regulation of virtual currencies in the Philippines pushes through, we can expect more adopters and it might be the push the cryptocurrency needs to reach the mainstream markets.

Bitcoin Cash’s price is above $1,500 and combining it with Bitcoin’s $9,600 price at the time of this writing, reaches over 11,000 USD. For those who kept and did not sell their BCH, are most likely enjoying the outcome of the prices regardless if they may not see eye to eye with scaling ideas. But the next fence of 10,000 might be an easier jump than we think it is because of the many new adopters and trading markets we see today.

Continue playing on Bitcoin casinos with Bitcoin to further increase your chances of winning and making more bitcoins. Not only do you have great chances of having overflowing bankrolls,  but you can also experience the entertainment and amusement of playing one-of-a-kind Bitcoin casino games without any hassles. Just remember to be a responsible gamer and have fun!