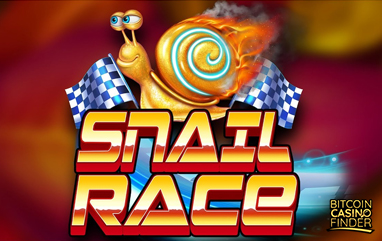 Snail racing is one of the most unusual but popular forms of entertainment in the United Kingdom. Despite this, many people take it seriously. There’s an annual “World Snail Racing Championships” in Congham, Norfolk, and London even held a “Guinness Gastropod Championship” in 1999.

It can be exciting to watch an actual snail racing competition outside the UK, so video game developer Booming Games is here to grant wishes. With the release of Snail Race, slot enthusiasts can earn money with the aid of Booming Games platforms and partner casinos.

Snail Race slot is the latest addition to Booming Games’ portfolio of interactive content. Without a doubt, it offers an exciting theme we don’t normally see in Bitcoin slots. The main characters of the game are three, small snails named Max, Tom, and Bob. The three snails feature cartoon-style graphics that match the entire layout.

Max, Tom, and Bob are the highest-paying symbols. The snails move with every spin. Each one on the game moves from one reel to another until they reach the last reel on the left. For medium-payouts and surprises, the caves and racing flags are other important symbols you need to keep an eye on. The low-paying ones are the royal playing cards.

The layout is crucial to the game. Snail Race features 6 reels, 3 grids, 20 paylines, and medium volatility. The 7th reel is an important area. It houses the three snails that will appear on the game per spin.

The list of bonus features is where the actual racing theme comes in. You can earn more with each shuffle when the following are triggered:

Snail Race Bonus Round – when there are three racing flags on the game, a bonus round with up to 50x multiplier will appear. The top three snails with the highest multipliers line up on the reels and race. The first one who reaches the finish line will grant you the corresponding multiplier.

Expanding Wilds – You need to use the snails strategically when shuffling the reels as each of them brings random multipliers ranging from 1x to 3x.