Does Bitcoin Have What It Takes To Replace The U.S Dollar? 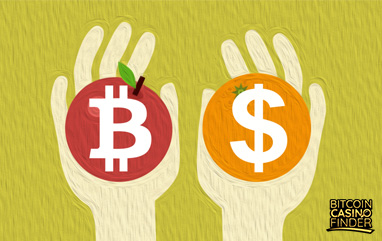 The global community has seen the potential of Bitcoin, including its soaring trading price in the past few weeks. But can it replace the dollar—or the entire U.S money supply? Anyone can agree that among all the problems that keep Bitcoin from totally replacing the U.S. dollar in day-to-day transactions, volatility is the biggest concern since the higher the prices are, the riskier the security. Let’s see what market analysts and financial services companies are debating about.

IN THE EYES OF A SKEPTIC

Union Bank of Switzerland (UBS), a Zurich-based multinational investment bank and integrated financial services company, reported that Bitcoin’s price must reach nearly $213,000 to actually replace the dollar supply. But they also added that the digital coin cannot be considered money or an asset because it’s versatility also has limitations, their report states: “our findings suggest that Bitcoin, in its current form, is too unstable and limited to become a viable means of payment for global transactions or a mainstream asset class.”

Bitcoin and other cryptocurrencies can potentially become an alternative payment medium in the near future, but crypto can’t totally replace dollars due to volatility. One proof was when the volume of Bitcoin used in commerce went downhill after its peak of $411 million in September 2017. Hence, it’s still incomparable with the U.S dollar–the world’s leading reserve currency for more than 50 years.

FROM THE PERSPECTIVE OF AN OPTIMIST

Contradicting the skeptics is Jack Dorsey, the co-founder and CEO of Twitter, as well as mobile payment app Square. Last March, he said in an interview that Bitcoin can be the world’s single future currency, stating: “probably over ten years, but it could go faster.”

Backing Dorsey’s statement is Ken Jacobs, the CEO of financial advisory and asset management firm Lazard. He stated that though the U.S dollar is the main international currency, that could change in the near future. “There’s enough technology out in the world today with cryptocurrency and changes going on that you can imagine, if you let your mind wander a little bit, that something becomes an alternative in the future.”

Bitcoin remains a front-runner to replace the U.S money supply. Fighting its volatility is the fact that people from other parts of the world can transfer Bitcoin abroad to rule out costly taxes and inflation, making emigration and financial stability possible.