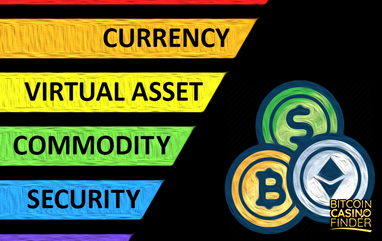 Traditional fiat currencies remain as the world’s official financial reserve. Most central banks and national governments haven’t gone into the crypto-business yet, but they didn’t completely write off its capabilities just yet. Most of them, however, are disoriented—unsure if these coins should fall under the asset classification, currency, or collectible. Consequently, Bitcoin, Ethereum, Litecoin, Bitcoin Cash, and other major cryptocurrencies lack one, determining factor.

Some nations consider cryptocurrencies as money. Though not an official currency or a legal tender, Bitcoin is widely accepted as a mode of payment in countries such as Japan, India, the USA, and Germany. Concurrently, other countries like Mexico and Denmark treat cryptocurrencies as a highly speculative asset—quite the opposite of economic assets. None of these considerations are wrong as cryptocurrencies are versatile, but there’s a need to classify them based on their own qualities.

Cryptocurrencies function as a commodity, security, property, and money in the US. This is due to several  classifications given by the country’s Securities and Exchange Commission (SEC), Commodities and Futures Trading Commission (CFTC), the Internal Revenue Service (IRS), U.S. Treasury Department, and the Financial Crimes Enforcement Network (FinCEN).

Cryptocurrencies function as a commodity, virtual asset, and legal tender in these three nations. The Canadian government regards the coins as a legal tender because they believe that this approach is more unified, with the Canada Revenue Agency (CRA) treating them as commodities. In Mexico, the government targets them as commodities as well due to the previous remarks of Banco de Mexico governor Agustin Carstens stating that “Bitcoin isn’t regulated by a central bank, it’s a commodity rather than a currency.” Traveling to South America, the classifications appear to be mixed in Venezuela, Brazil, Chile, Colombia, and Argentina.

The continent, as a whole, defines cryptocurrency as private money, a unit of account, contractual means of exchange, and transferable value. But in Germany, Europe’s biggest economy, Bitcoin has been regarded as “private money” since April 2014. This makes cryptocurrencies a financial instrument subject to trading and taxation.

China does not believe in the ability of cryptocurrencies to change the future of buying and selling. They claim that in terms of nature, “Bitcoin is a specific virtual commodity that does not have the legal status equivalent to currency and cannot and should not be used as currency in the market”. Fortunately, in other countries elsewhere in Asia, cryptocurrencies are flexible. Japan classifies Bitcoin as a “property value” that can be used to buy products and services, Singapore views them as assets, and Hong Kong regards them as securities.