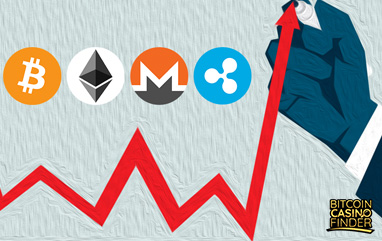 Not all sides of the cryptocurrency market is booming since there are still digital coins struggling to control its market volatility. Fortunately, it finally appears to be in full recovery mode when all major coins experienced considerable leaps in digits earlier this week. See what this ongoing positive momentum means in the market update below.

The top coins with the most considerable trajectory are Bitcoin (BTC), Ethereum (RTH), Ripple (XRP), and Monero (XMR). Total market capitalization of all cryptocurrencies sits at around $286 billion to press time.

Bitcoin is now up for good trading after rising in considerable trajectory, gaining around $7,209 over 24 hours. It went further beyond yesterday’s trading price of $6,679, with today’s upwards spike still on-going. All in all, the increased digits equal to 8 percent. This is a short-term achievement for Bitcoin since it brought its weekly and monthly gains into the net positive territory.

Ethereum also saw a rise in volatility, but saw a more modest increase compared to Bitcoin. The altcoin was up by almost 4 percent over the past 24 hours to press time, still enough to breach the $494 trading level. For the past few days, Ethereum’s growth secured a positive weekly percentage gain of a solid 8 percent. Still, it’s not bad news since the coin’s monthly performance is almost 6 percent in the negative.

Another altcoin is dominating the listings this week. Monero is the leading performer of the top twenty cryptocurrencies consistently tracked by financial analysts over the 24-hour period. It jumped to almost 9 percent increased, making way to $143 trading level at press time.

Following Bitcoin’s trajectory is Ripple. The coin’s 24-hour performance closely followed the percentage of the leading digital coin today. It saw an impressive boost of approximately 6 percent and currently trading around $0.50 to press time.

For the performances of the remaining coins in the top 10 listings, see the chart below.