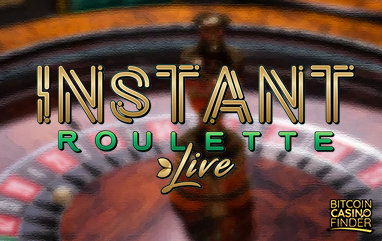 Evolution Gaming updated its portfolio of traditional online and Bitcoin live dealers with the addition of Instant Roulette, ‘the fastest live casino game on Earth’. The new game was introduced earlier this year at ICE 2020 as part of the developer’s 12 new table games for the year.

Instant Roulette’s official release follows Evolution Gaming and its two successful editions under the same category, Lightning Roulette and Immersive Roulette. Earlier this year, the developer vowed to release new live table games under their game show-inspired portfolio every month. August calls for Instant Roulette, so here’s what Todd Haushalter, Chief Product Officer at Evolution, has to say about the new game:

“With Instant Roulette we really wanted to allow the player to control the pace of the game, similar to the RNG experience but with the trustworthiness of live. Each and every player can take as much time as they like setting up their bets. Then, when they are ready, they push the ‘Play Now’ button and boom, they are right there playing on the next available wheel!”

Instant Roulette is played in 12 individual, synchronized, and automatic roulette wheels that are all presented live at the Evolution Gaming studio. Each wheel has a number to represent the bets of live players in a specific round. Despite the number of wheels, the game features the standard mechanics of a European Roulette and an average RTP of 97.30%.

Before and during each spin, players can control the Bitcoin game and play at their own pace. The betting time for Instant Roulette is unlimited. Players can click the ‘play now’ button once they’re ready to spin the wheel. To get started, the live dealer then drops the ball one after the other until the 12 wheels are completed. All the wheels will spin without pause until the winning combination is determined. The wheel closest to the first ball drop automatically represents the wheel at stake for the game round.

For continuous betting at a faster pace, players can click the ‘Rebet’ button to automatically start the next round with the same set of bets. Each round lasts 15 to 18 seconds and carries speedy results.