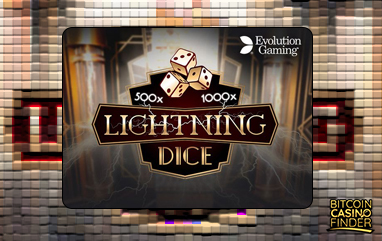 Evolution Gaming is a household name when it comes to delivering quality live-dealer casino products, and they have proved this once again with the release of their new Lightning Dice, a unique Bitcoin dice variant under Evolution’s Lightning Family.

Spearheading the release of the game is Todd Haushalter, Chief Product Officer at Evolution Gaming, who commented: “Everyone loves dice, plays with dice growing up, and understands how they work, yet there are no fun dice games in the online gaming world. We decided to change that by launching two dice games this year. The first was Super Sic Bo, which has been a runaway success, and now the ‘little sister’ of Lightning Roulette is here, and that is Lightning Dice.” Following the recent introduction of two new live casino games by the software provider, this perfectly highlights the positive direction of the brand.

Like the design and structure of the Lightning Roulette, the dice version offers an “electrifying” interface supported by a black and gold background and an Art Deco setting. This specific design aims to achieve a distinctively stylish and modern look, whether the player is playing through desktop, tablet, or smartphone.

The mechanics of the game is as simple as playing the traditional version but puts forward new terms and conditions. In here, there are three standard dice thrown into an in-game “Lightning Tower.” Each player should only bet on the result and total of three dice when they finally reach the base of the tower, and they can use the “Bet on All” button to place a wager on all 16 spots. The camera zooms in every time the three dice reach the base, so the players get a clear view of the movements.

Some bonuses and features players can expect from the game feature random multipliers which can increase winnings up to 1000x. When the betting time is over, the three dice lands between several lightning numbers on the playing grid and will allow the “lightning” to strike. Each digit from the grid represents a random multiplier. If the player placed a bet on the specific grid with the winning number, the payouts will be multiplied.