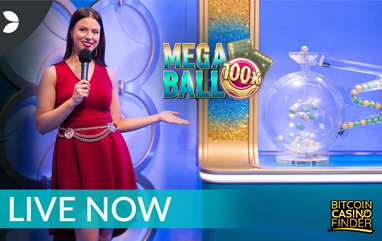 Evolution Gaming, one of the biggest providers of live casino content and solutions in the industry, revealed a refreshingly new and exclusive product to expand its portfolio of games-of-chance. Mega Ball, a game that closely resembles Bitcoin lottery, is now live at Evolution Gaming.

Mega Ball was previously unveiled by the developer at ICE London 2020 last February. During that time, Evolution Gaming announced the major expansion of its game-show style games in 2020, and Mega Ball is set to lead the release of the new titles.

Finally on our way, Todd Haushalter, Chief Product Officer at Evolution Gaming, confirmed the launch of Mega Ball this week in a press release: “With Mega Ball we wanted to create a game that has huge prizes, drama, and excitement. Bingo is a hugely popular game with lots of players and lotteries are loved the world over, so we decided to combine the two and also add a huge slot machine to create Mega Ball! I think players are going to love this game!”

The machine has 51 balls, and each one is randomly picked one after the other in every round. The central feature of the game is the 21st ball or the ‘Mega Ball’ which offers random multipliers between 5x to 100x and a jackpot.

The actual game will reflect on Evolution Gaming’s platform which is available on desktop, tablet, and smartphone. Players just need to predict the winning numbers, sit back, and wait for the results. Place up to 12 lines per card. The more lines on a wager, the more money they can win. If the player places a bet on the Mega Ball number line, his winnings get multiplied by up to 1,000,000x the initial bet.

Evolution Gaming has new upcoming titles soon. In the meantime, Mega Ball joins exclusive titles from the developer’s game-show style games, such as Lightning Roulette, Deal or No Deal Live, and Dream Catcher.