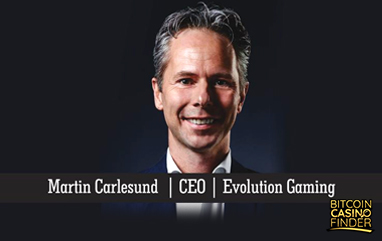 As the end of the year nears, things are looking better for award-winning online casino supplier Evolution Gaming. The company recently reported that its revenue had increased by 47% on a yearly basis, garnering a total of €84.7m. And the reason for the revenue increase? New live casino users.

Evolution Gaming CEO Martin Carlesund confirmed that ‘live casino virgins’ are the top customers of their 2019 titles. From fiat and Bitcoin live dealers to slots, new users bring profits to Evolution Gaming’s platforms and partner casinos in different markets. Carlesund is positive that the company’s products are reaching ‘new player types’ completely, particularly in the Asian and North American market. The European market, meanwhile, holds its biggest number of new and seasoned players.

“Our investments in new games and studios are having an increasingly strong impact, which is reflected in both the high growth as well as stronger margins. We have also seen a further increased demand for Evolution’s products globally. In addition, we now see clearly that we are reaching completely new player types, who to a large extent are playing live games for the first time. These new players are being converted from other game categories, such as slots, which is very encouraging to see,” Carlesund said in a press release.

2019 is Evolution Gaming’s busiest year. Recently, the developer launched its first US-based gaming studio and its tenth overall studio in New Jersey. It followed the launch of its Malta studio last 2018. So far, they partnered with multiple New Jersey online and brick-and-mortar casino operators.

To regulate all partnerships and future studios, Evolution Gaming also secured its Pennsylvania Online Gaming Manufacturer License this year. Reports said that they will set up a local live dealer studio in Pennsylvania in the future. In the meantime, they focus on the New Jersey studio to deliver more titles specifically designed for new players. Evolution Gaming has nine titles so far, and it’s expected to grow double at the end of the year.