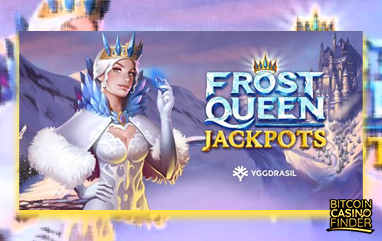 Malta-based provider Yggdrasil is back in the game with the recent release of Frost Queen Jackpots, a video slot straight out of winter fantasy. Classic and Bitcoin slots fanatics are welcome to search for hidden treasures scattered throughout a castle and win huge jackpots in return!

Jonas Strandman, Senior Games Strategist at Yggdrasil, introduced the game to the public yesterday. The release marks Yggrdasil’s first 2021 title. It follows the release of Pirates 2 Mutiny and Christmas Tree in December.

“Frost Queen Jackpots transports players to an icy castle in the bitter midwinter with the chance to escape with massive jackpots…Yggdrasil’s multi-feature jackpot games have been player favorites for a half-decade and Frost Queen Jackpots follows in line with simple rules, a big variety of features, and frequent jackpot chances,” said Strandman.

The game is set in a palace ruled by a beautiful Frost Queen. Despite the cold theme, the audiovisual presentation of the game offers a fuzzy warm feeling for the cold winter days. Frost Queen Jackpots can be played any season.

Players can make winning combinations using jewels, mirrors, crowns, jeweled chaps, and the Frost Queen herself. The queen is worth 37.5 to 200 times the stake for five of a kind. Low-paying symbols are represented by frosty J-A royals. The highest jackpot a player can hit using these combinations is 1,265x the original stake.

Pick & Click Chest- when two mirror scatter symbols land, five chests appear on the screen. Each chest can reveal a prize of 1x to 4x the bet, 10 free spins, or a random key.

Magic Mirror – three or more scatter symbols in the game can either award free spins or trigger the Treasure Chest Bonus Game. The game features chests that contain bet wins of 5x to 100x and random keys for free spins.