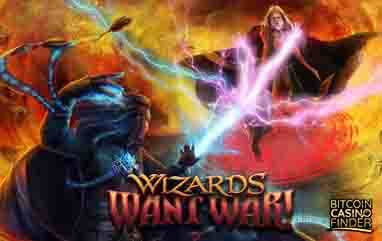 Toni Karapetrov, Head of Corporate Communications for Habanero, led the press release at European Gaming: “There’s nothing more magical than big wins and players can achieve them with our latest release, Wizards Want War!. Featuring virtuous and villainous wizards, players can watch the two go head-to-head in spell-binding fashion thanks to immersive graphics and sounds. It’s sure to prove popular.”

From the name itself, Habanero will feature mighty wizards fighting for power and survival in Wizards Want War! video slot. It’s basically a battle between good and evil as the main characters in the game highlight the Good Mage and the Evil Mage.

The game features a 5×3 layout with 25 paylines. The minimum coin size is $0.01, while the maximum is $1.00. It doesn’t have a progressive jackpot system, but players can hit huge multipliers and payouts with the aid of bonus games and other features.

To make winning combinations, you have to manipulate the symbols in the game, particularly the mighty wizards and other important characters. Aside from the Good Mage and the Evil Mage, other symbols include dragon amulets, bird amulets, fire-breathing dragons, magical books, skulls, and wilds. All figures and characters act as medium and high paying symbols. The low-paying ones are the usual 10 to A card suites.

Wild Features – the wild symbol can cover an entire column if positioned in the right reel. It can also form new combinations and assist regular symbols to gain more winning combinations.

Free Spins – the free spins can only be triggered by the wizards. If you’ve reached the stage where you can select one of the two wizards for one duel, the chosen representative will fight the other to determine the number of free spins.

Duel Wins – other duels between the two wizards can help you lock in extra wins, including 9x multipliers, 10 free games, and 6 wilds.