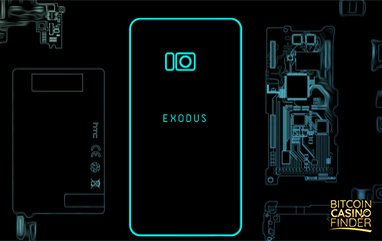 Taiwanese consumer electronics company HTC finally taps into the world of the decentralized blockchain technology and announced the launching of “the first native blockchain phone” which can support multiple types of cryptocurrencies, including but not limited to Bitcoin (BTC) and Ethereum (ETH) networks.

Phil Chen, the creator of HTC’s first virtual reality video player and headset—Vive, announced the upcoming project on May 15 at the Consensus 2018 NY event. HTC is naming the blockchain phone “Exodus” and once released to the market, the company reportedly considers allowing cryptocurrency owners to purchase the phone via their wallets. However, there is no announcement regarding the price yet.

As previously said, Exodus will support “multiple blockchain protocols” such as Bitcoin and Ethereum, but HTC will also include in the phone’s default list other open payment protocols like Lightning Network (LN) and Dfinity network. According to Chen, the company’s mission is to promote and support the entire blockchain ecosystem to help other digital currencies expand their areas of dedicated nodes. Chen also stressed that the HTC Exodus will provide high standards of decentralization and data protection under the secure hardware enclave: “I want to see a world where the end consumers can truly own their data—browsing history, identity, assets, wallets, emails, messaging—without the need for central authorities.”

HTC Exodus is not just a blockchain phone with a universal wallet, it’s also a smartphone meant to dominate the market. The phone has the usual features of a smartphone such as a touchscreen display, a rear camera, and SIM and microSD card support, but the qualities that will really surprise consumers are the following:

Like a crypto wallet, each Exodus phone will be owned by one person with a corresponding address. Each one will be unique as it serves as its own blockchain node. One Exodus phone translates to one blockchain encryption, making it near-impossible to bypass or hack it. The user’s identity and personal information will be encrypted and stored like a cold wallet on the phone, not on the cloud.

Exodus will be completely run by the latest Android version but combined with specially designed applications by HTC: the DApps. These are mobile applications that are openly run by the blockchain technology and openly stored on a public ledger. Users have a chance to accumulate DApps incentives every time they use cryptocurrencies for transactions.