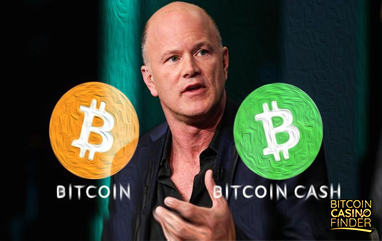 Novogratz was ranked a billionaire by Forbes in 2007 and 2008. He entered the cryptocurrency markets in 2015 after a 26-year career in Wall Street under the Goldman Sachs and Fortress Investment Group. It is then safe to say that his opinion on this matter will start a fire on the issue. He went after the Twitter account and defended BTC’s status as the original cryptocurrency referred to in Satoshi Nakamoto’s 2008 white paper, claiming that BTC is the true holder of the ‘Bitcoin’ brand.

After the tweet from @Bitcoin saying: “Bitcoin Cash is the oldest cryptocurrency. Its white paper was published in 2008 and the genesis block mined in January 2009. Bitcoin Core (BTC) is an experimental currency that does not have a white paper and has only operated under its current model for two years.”, Novogratz responded with sharp words: “Enough already. Bitcoin core is BTC. It is a store of value. It is digital gold. Its market cap dwarfs bitcoin cash. If you want to be a payments currency by definition you need to have stable value. So why own it. ??”

He highlighted the cryptocurrency’s dominance by noting that it “dwarfs bitcoin cash”. In fact, it is worth knowing that during that press time, CryptoCompare released a data concerning the current status of the coins. Bitcoin’s market cap is of $162.3 billion, while Bitcoin Cash’s market cap is of $29.37 billion. Moreover, Bitcoin is currently trading at $9,531 per coin, and Bitcoin Cash is trading at only $1,716 per coin.

The fiasco on Twitter with Novogratz is not the root of the controversy. The twitter account @Bitcoin account has been suspended and subsequently deleted in the past as some BTC supporters reported it for tweeting spam and stealing identities while actively promoting BCH. Consequently, the misunderstanding between BTC and BCH almost reached the point of a lawsuit last April. Several members of the pro-BTC community started a campaign for a cause to gather funds for a lawsuit against the crypto wallet and media service Bitcoin.com. The complaint stated that these platforms were intentionally misleading buyers to purchase BCH by completely separating its origins from BTC. However, it was reported that the lawsuit has been canceled due to organizers lack of funds.

Regardless of the market cap and other factors affecting the prices of BTC and BCH, this controversial debate will more likely last for a few years.