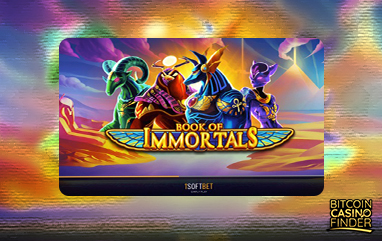 One of the world’s leading supplier of online and mobile casino software and games, iSoftBet, released another premium slot game on top of their award-winning portfolio. Book of Immortals, a slot game featuring Egyptian mythology, is now available in the Swedish betting platform LeoVegas and will reach a wider market after the end of its exclusivity period.

Leading the launch and commenting on the new title release is Michael Probert, Chief Commercial Officer at iSoftBet: “We are delighted to announce that after a successful exclusivity period, Book of Immortals is open for general release to our wider partner network…With its fearsome characters and captivating graphics, we are looking forward to Book of Immortals holding an important place in our portfolio for years to come.”

Ancient Egypt and its rich mythology are the highlights of iSoftBet’s Book of Immortals. It has the classic symbols and characters straight out of fantasy in a 5-reel, 10-line video slot. In here, you’ll see Anubis, the God of embalming and the dead, leading other minor gods and goddesses. Their characters will be included in the combinations. Meanwhile, the game’s wild is in the form of hieroglyphs-covered scarab symbol.

God Symbols – The Gods serves as the symbol of immortality, and they will allow you to have an entire bonus spin round. Further, they can function as expanded symbols where you can earn additional cash prizes.

Hieroglyphics Symbols – This acts as the game’s wild symbol and activates the bonus spin mode if you can land at least three reels in one go.

The bets require 10 coins to allow you to activate all the lines for each round. The total bet should range from $0.10 to $10.

The big reward comes via scatters, in which you can receive 200x the stake you’ve initially bet on all five reels. You can get a jackpot of up to $2,000 each round. As for the free spins feature, you have to follow certain conditions. You need 3 to 5 visible Book of Immortal icons on the reels. They can trigger 10 free spins and can pay the aforementioned 200x stake as well.