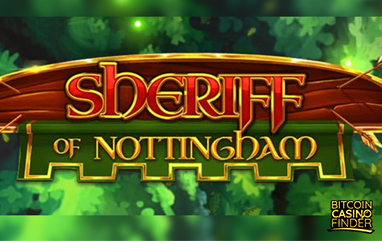 Leading casino and mobile game developer, iSoftbet, has more to offer this month. The developer released its new and most rewarding Bitcoin slots game yet—Sheriff of Nottingham, and it’s ready to transport players back to the Elizabethan era where Robin Hood roams free.

Mark Claxton, Head of Games at iSoftBet, announced the launch of the game through a press release: “Sheriff of Nottingham hits the bullseye with every magical bonus round we’ve developed. This feature-rich game is another immersive title from our games team, who continue to develop the best content on the market. With four randomly triggered modifiers and two lucrative bonus rounds, Sheriff of Nottingham is another thrilling addition to our ever-growing slot portfolio.”

The Sheriff of Nottingham is set on the Sherwood Forest—a hidden forest in Nottinghamshire, England, famous for its association with the fictional story of Robin Hood. Carefully capturing the legend, iSoftbet made use of cartoon images and graphic designs for the symbols and background.

Create winning combinations using the Sheriff of Nottingham himself, Robin Hood, the Merry Men, and other characters from the legend. The characters are the highest-paying symbols, while the medium-paying ones are represented by crowns, royal letters, trumpets, swords, and coat of arms. The J to A royals are also present as low-paying symbols.

The Sheriff of Nottingham slot is played over 5 reels, 3 rows, and 25 fixed paylines. The game’s RTP rate is set at 96%, while the volatility is listed as medium. With a minimum of 0.25 coins and a maximum of 25.00, you have a chance to earn rewards and hit the 500x multiplier jackpot in the game.

Wanted Respins – if 5 of the Merry Men appear on the reels, this triggers the respins feature.

Pick a Royal Letter – a random feature where three sealed letters appear on the screen. Each letter contains a game modifier. Once opened, you get the following: Wanted Spin, Bonus Add, Sherriff Wilds, and Win Spin.