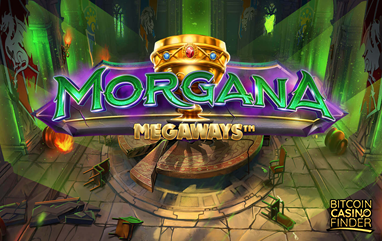 Morgana, a powerful sorceress in the Arthurian legend who once served as the magical savior and protector of King Arthur, is the protagonist of iSoftBet’s latest Bitcoin slot release. Morgana Megaways is now live at the developer’s partner casinos to grant magic, mystery, and rewards.

Mark Claxton, Head of Games at iSoftBet, shared the latest addition to the developer’s slot portfolio in a recent press release. According to Claxton, the Arthurian-themed game was inspired by the success of Sheriff of Nottingham, the developer’s previously-released themed slot inspired by Robin Hood.

“Morgana Megaways is the latest action-packed chapter in our Twisted Tale series, following on from the initial success with Sheriff of Nottingham. iSoftBet’s Megaways portfolio is growing rapidly and we can’t wait to see how players react to our innovative take on Arthurian legend as Morgana looks to bewitch her way to finding the Holy Grail,” Claxton said.

Camelot-themed games and stories of the Round Table usually feature King Arthur and the knights in his fellowship. But this time, iSoftbet puts the woman Morgana in the limelight as the main character of Morgana Megaways.

The action takes place in the Camelot hall with the mythical round table in it. Players can make winning combinations using Morgana herself, dragons, dragon eyes, grails, and a collection of colored-gems. For low-value symbols, it has the usual card royals.

Max Megaways feature – Guarantees seven matching symbols on each reel for a maximum
of 117,649 ways spin when triggered.

Free Spins bonus game – The game can be triggered by landing multiple Grail scatter symbols or by using the bonus buy option which costs 80x your stake. The bonus game awards 10, 15, 20, or 30 free spins.

Mystery Symbols – A symbol that randomly appears on the reel. When this symbol is in view, it can transform into a regular pay symbol and make winning combinations.