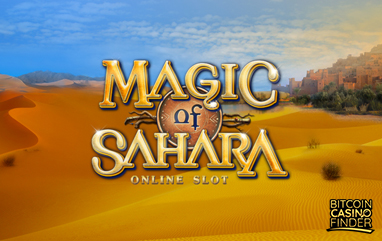 Award-winning gaming content provider Microgaming once again teams up with Estonia-based innovator All41 Studios to launch another video slot. Following the debut of Le Kaffee Bar last June, the Magic of Sahara video slot is now open to the public through Microgaming’s platform and partner fiat and Bitcoin casinos.

James Buchanan, Global Operations Director of Microgaming, led a press release to introduce the new title to slot enthusiasts. From his statement, he commented: “Magic of Sahara brings the wonder of the desert sands to life. All41 Studios has crafted a truly immersive world with the game’s excellent soundtrack and detailed artwork, which dynamically transitions between day and night cycles, creating a spellbinding atmosphere.”

Magic of Sahara is now the second fiat and Bitcoin slots game developed by Microgaming and All41 Studios. The game is set in the Sahara Desert, the largest desert in the world. Players can dive into the mystical journey of the game to discover treasures, explore the African nomad culture, and celebrate the different fables surrounding the desert. The soundtrack and graphics of the game are true to the theme; the animations, in addition, creates concrete transitions between day and night cycles in the desert.

Magic of Sahara features 5 reels and 9 active paylines. The acceptable wager ranges from $0.09 to $45. The biggest reward a player can get is $108,000 since the Return to Player (RTP) percentage is set at 95.29%. Meanwhile, winning combinations can be made through the game’s special symbols such as images of Tuareg men and women, stones, camel caravans, and merchants.

The game is packed with unique bonus features. All41 studios didn’t just focus on Magic of Sahara’s appearance, the company also came up with new slot rewards that new and seasoned slot players will surely enjoy. Some of the best bonus features you can trigger are the Token Chain and Free Spins.

Token Chain – a virtual merchant in the Sahara desert rewards players with an ‘enigmatic merchant symbol’. This will function as a collectible token that players can use to get free spins and other rewards.

Free Spins – free spins and re-spins can be triggered by landing three or more special scatters and by collecting tokens from the merchants.