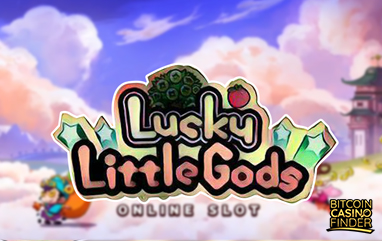 Lucky Little Gods’ release is timely as it falls between the Western New Year’s celebration and the Chinese New Year, which is on February 16th this year. The new Microgaming slot design is thoughtfully set on on a mystical background along with rolling mists and weeping willow trees. The theme is based on a Chinese folklore and gives it a cartoon vibe. If you like bold colors, awesome graphics, and an action-packed slot game with high rewards, then playing Lucky Little Gods slot is perfect for you.

The slot game does not end with its visual designs but is also a complete video slot game that provides many ways to win. Lucky Little Gods is a five-reel slot with 243 pay lines. It’s symbols blend with its mystical-theme. The symbols are Chinese Writing, Chinese Deity, and more.

Lucky Little Gods presents fiat and Bitcoin bonuses that help players earn bigger payouts. The first is the Golden Tree bonus, where it randomly rewards 40 times your bet anytime the Scatter symbol rolls in the first or fifth reels. The second bonus is the Little Gods feature that only triggers randomly and gives out cash bonuses equivalent 40 times of your stake. The bonus that you should be looking out for is the Treasure Pot Scatter bonus. When the Treasure Pot symbol rolls in the middle reel of the slot you’ll get a choice of which treasure pot to pick where it holds different cash prizes. Lastly, the slot includes free spins. If 3, 4 or 5 firecracker symbols appear on the reels, you’ll be awarded up to 10 free spins that can help you grow your earnings.

You can play the new slot game on any Bitcoin casino that carries Microgaming products. In addition, since the Bitcoin casino software provider created their games to be compatible with mobile phones and other platforms, you’ll be able to play Lucky Little Gods slot anywhere and anytime.