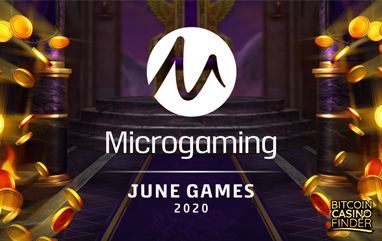 With the help of independent game studios, Microgaming is ready to showcase its new releases for the month of June. The developer’s new lineup of exclusive games offers a wider range of choices for new and loyal players.

Microgaming introduced a total of five new collaborative games on its press release, which are expected to grace both fiat and Bitcoin casinos. Describing the lineup, the developer claimed that “each title invites players to immerse themselves in striking artwork, toe-tapping soundtracks, and engaging mechanics”.

This new game from Gameburger Studios headlines Microgaming’s June releases and is a part of the football-themed slot collection released by the software provider. The slot game went live on June 2, which is set in a virtual football stadium and hosted by an announcer. There’s a commentator that describes what’s happening—whether you’re winning or not. Players can make winning combinations with its game layout of 5 reels, 3 rows, and 20 paylines.

Set for release on June 9, Aliya’s Wishes is a collaborative product of Microgaming and Fortune Factory Studios. The game is a fantasy-themed slot with genies granting wishes, treasure chests filled with riches, and Middle-Eastern folktale characters that grant rewards. The game’s layout has 5 reels, 3 rows, and 20 paylines.

Microgaming and Neon Valley Studios invite players to revisit the ancient world of swords and sorcery and win the battle against light and darkness. The fantasy-themed slot has 5 reels, 3 rows, and 20 paylines. Players can win rewards by collecting diamonds, unlocking reels, and uncovering hidden treasures.

Microgaming introduces a new product from Just For The Win on June 23. Aurora Beast Hunter is a retro-style slot with impeccable graphics, rocking soundtrack, and overflowing rewards. The game is played over 5 reels, 40 paylines, and a configured game layout of 3-4-3-4-3 row.

Ocean-themed slot Wild Catch by Stormcraft Studios closes out Microgaming’s June releases. The game goes live on June 30, and it offers a win potential of up to 9,000x the initial bet. Players can trigger winning combinations over 5 reels, 3 rows, and 243 paylines.