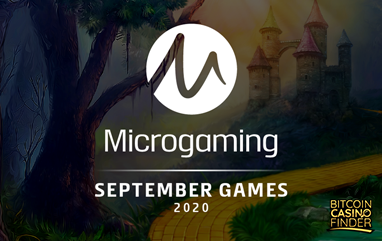 Top Bitcoin software provider, Microgaming, arrives this fall with a new set of premium slot releases from its third-party independent partners. Some titles from the lineup will headline the launch of new game features and enhanced jackpot offerings from Microgaming, such as WowPow jackpot and Mega Moolah.

The Sisters of Oz by Triple Edge Studios is the second slot release for fiat and Bitcoin casinos to launch Microgaming’s WowPot Jackpot feature. WowPot debuted on Book of Atem: WowPot by
Kindred Group. The game is housed in a layout with 5 rows, 3 reels, and 10 paylines. Its progressive jackpot feature offers a main prize starting from €2 million and a Major jackpot seeding starting at €50,000.

Fortunium Gold: Mega Moolah has 5 rows, 5 reels, and 40 paylines. The game follows the story of two heroes: Victoria, a navigator and explorer, and Maximilian, an industrious inventor of mechanical masterpieces.

Microgaming and Neon Valley Studios’ new collaborative product, Noble Sky™, will launch on September 29. As another steampunk genre, the theme of the game centers around a gentleman explorer ‘in search of fame and fortune’ in the 19th century.

Noble Sky has 5 reels, 3 rows, 25 paylines, and a 96.12% RTP. Online casinos can offer it with a medium to low volatility. Players can make winning combinations using Neon Valley Studios’ unique bonus features, such as Airship Wild Respins, Vault Bonus, and Multiplier Trail. The game offers a grand jackpot with win potential of up to 5,000x the original stake.

Microgaming offers more exclusive titles this September. Watch out for the dates and updates following Spectre Estate by Just For The Win, One Million Megaways™ BC by Iron Dog Studio, Magic Merlin Megaways™ by Storm Gaming, Star Clusters Megaclusters™ by Big Time Gaming, and Cubes by Hacksaw Gaming. For table games, Microgaming partnered with Switch Studios to release No Commission Baccarat and Sic Bo on September 17 and 24, respectively.