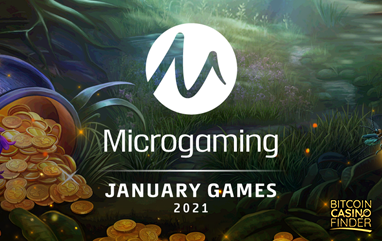 Here’s the list of Microgaming titles going live this month:

Foxium, an Estonian game studio that recently partnered with Microgaming, will deliver its latest title, Foxpot, on January 12. The game is a 3-reel, multi-dimensional fiat and Bitcoin slot that only offers one active payline. Despite the challenging layout, players can hit exciting and rewarding bonus features, including the Money Award, respin mode, and multiplier.

Microgaming and Northern Lights Gaming will launch Golden Stallion Ultraways on January 14. The title features a Western theme, so expect to see wild horses and canyons in the Old West. The game’s unique Ultraways mechanics offer 196,608 ways to win.

From Gameburger Studios, one of Microgaming’s long-standing independent studio partners, comes the release of Hyper Strike slot. The game debuts on January 19. It features a 5×3 reel layout with 20 paylines. Lucky players have a chance to hit a jackpot worth 2,000x the stake and spot a gold star wild that can pay up to 125x the stake on each line.

Microgaming and All41 Studios’ Forgotten Island Megaways will debut on January 26. The game is inspired by the story of King Kong, a 2005 epic monster adventure film. It offers a 6-reel layout loaded with features like Rolling Reels, extra reels, and Kong Spin. The latter is triggered when the gigantic gorilla awakens.

Closing the month of January is Microgaming and Gold Coin Studios’ Animals of Africa. The slot title launches on January 28 and features the country’s wildlife, filling the reels with images of lions, zebras, monkeys, and rhinoceros. It offers a massive multiplier jackpot worth x8000 the original stake.

Roulette x5 from Golden Rock Studios is the only table game on the list. The game’s debut will coincide with the release of Animals of Africa. The title is a uniquely-designed traditional European roulette game that offers an exciting mechanic. It’s the only online roulette that grants a “double your winnings” multiplier without changing the odds.