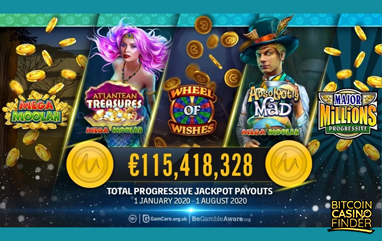 Microgaming welcomed the seventh millionaire from its popular progressive jackpot network after the total payouts from all jackpot winners this year surpassed the €30 million mark.

The latest and seventh millionaire who helped Microgaming reach the €30 million mark was a player at Spin Casino, a Maltese online casino owned and operated by Bayton Ltd. The winner hit the €1,650,382.89 jackpot last July on Major Millions Progressive and instantly became part of the network’s monthly winners. This latest victory means that on average, Microgaming crowns one millionaire a month.

The win also marks the third seven-figure jackpot generated on Major Millions Progressive slot this year. It follows the €1,650,910.31 prize money on March 14 and the €1,203,349.99 jackpot on June 12. Other huge payouts this year include four multi-million jackpot wins on Mega Moolah and three wins on its two standalone variants.

Although the seventh millionaire made his mark last July, UK spokesperson at Spin Casino only announced the news recently after Microgaming collected all the payout information of the seven winners from its progressive jackpot network.

“We are absolutely thrilled for our winner, who has become a millionaire overnight. Microgaming’s Major Millions has always been a popular game and we are delighted that the new 5-reel version is proving similarly so with our customers,” Spin Casino’s spokesperson said.

Microgaming’s Chief Executive Officer John Coleman led the announcement of the seven millionaires from the developer’s progressive jackpot network. In a recent press release, Coleman said: “We look forward to building on this momentum over the coming months, hosting more feature-rich games that feed into our leading jackpots, which have paid out over €115 million across 2,571,389 jackpots so far this year – that’s more than eight payouts every minute on average!”

At press time, Microgaming’s progressive jackpot network has a total lifetime payouts exceeding €1.2 billion. The software provider plans to include more progressive titles in the future to update the network.