NetEnt Debuts Its InfiniReels Feature On ‘Gods of Gold’ Slot 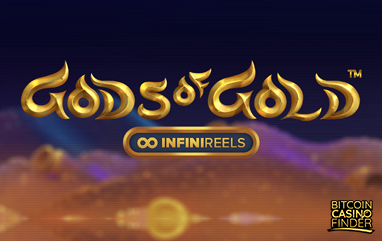 NetEnt just released its latest Bitcoin slots game featuring an infinite bet ways concept. Gods of Gold: InfiniReels, is now live at all NetEnt’s partner casinos and ready to take you to a new adventure.

Bryan Upton, Director of Games for Net Entertainment, announced the release of the new product and the infinite bet feature in a press release. Upton shared that Gods of Gold: InfiniReels is one of NetEnt’s groundbreaking products this year:

“Gods of Gold: “InfiniReels™ is a major release in our roadmap and is the perfect game to premiere our infinite bet ways concept – a mechanic which we have big plans for over the next year. We can’t wait for players to experience the excitement of InfiniReels™ and hope the mechanic will become a true fan favorite of our portfolio as we continue to explore its full potential.”

Gods of Gold: InfiniReels explores the ancient ruins of Mesopotamia, modern-day Iraq, and Kuwait. It is set on Mesopotamia’s historical tombs where ancient kings are buried. And deep under, players can find bonuses and rewards that are rightfully theirs.

The winning combinations are triggered by high-paying characters like the Genie, King, and Queen. The bulls and owls also give out generous rewards with multiple appearances. For the low-paying symbols, there are scattered color-coded gemstones every round.

The game has a medium to high volatility gameplay that matches NetEnt’s assigned RTP of 96.12%. Players can win rewards of up to 5,000x the original stake for 0.20 to 200 coins per spin.

Genie Appearance – When the Genie symbol shows up, the last reel and guarantees extra rewards.

Multi-Slam – A random bonus feature that offers 2 or 3 additional reels on top of InfiniReel’s base offering. It guarantees the formation of new winning combinations.

Win Spins – Players receive 10 to 30 free spins when 3 to 5 scatter symbols appear on the game.