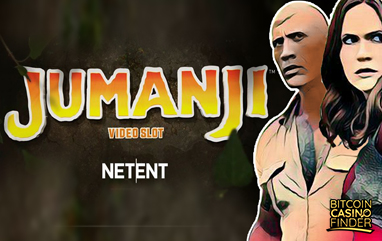 A surprise announcement on the Net Entertainment YouTube page showcases an upcoming video slot, Jumanji, to be added to their arsenal of spinning reel games. The game is based on one of 2017’s blockbuster movies and is sure to put you and other bettors around the world on the edge of your seats.

Jumanji: Welcome to the Jungle

Jumanji Video Slot sets its sights on a release this year. The game’s theme largely follows Jumanji: Welcome to the Jungle the movie released in 2017, starring Dwayne Johnson, Jack Black, Nick Jonas, and Kevin Hart. After NetEnt’s partnership with Sony Pictures, the fiat and Bitcoin casino software provider claimed the rights to develop the movie into a video slot. Furthermore, the 2017 movie is the second addition to the Jumanji series based on the 1981 book. The first release happened over two decades ago, in 1995, and was starred by Robin Williams.

The video slot revolves around the movie’s premises, featuring four teenagers transported into a video game called Jumanji. Although details of the new Bitcoin slot is still in the works, expect the actors in the movie play their part as actual symbols of the game.

NetEnt continues to add to its plethora of games

“Being able to secure a deal for another high-profile title showcases the moves we’re making in diversifying our roster of games.” NetEnt’s Chief Product Officer Henrik Fagerlund said in the company’s press release. True enough, Jumanji is a great addition to NetEnt’s portfolio of video slots based on movies, including Aliens, Scarface, and its most recent, Planet of the Apes.

So far there is no date of release just yet. But if you want to get your hands on this newest NetEnt game, you can visit NetEnt’s stand on ICE Totally Gaming Expo this February to get a sneak peek of what to expect on the game. It’s worth noting that their most recent movie-themed slot, Planet of the Apes was also announced during ICE last year.

Net Entertainment’s branded slot games continue its exciting streak and at the same time provides the most entertaining ways to build your bankrolls with its exclusive bonuses and free spins. Will this release become a flop or a score? Prepare your Bitcoin and await the release of the Jumanji video slot on the many NetEnt-powered Bitcoin casinos.