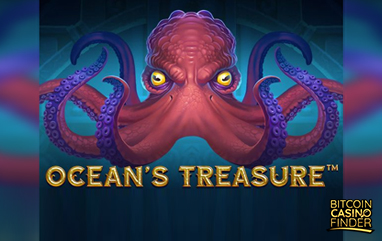 Director of Games, Bryan Upton, announced the release of the game on their official news site. Upton emphasized that Ocean’s Treasures is much better in every way than their previous slot releases: “Ocean’s Treasure’s combination of an immersive theme, striking graphics and anticipation building features are tailored to grab the attention of experienced slot fans and those in search of high-intensity a play session. Awarding more free spins to lucky players than any other NetEnt game and the potential for huge prizes, this deep-sea slot will make a lucrative addition to our partners’ portfolio.”

Poseidon’s Trident and the sea nymphs act as regular and stacked wilds, depending on the situation. The treasure chests act as a scatter and offer multiple rewards on different reels. The lowest-paying symbols that may help you come up with more rewarding combinations are the J, Q, K, and A royals.

Free Spins – when scattered treasure chests appear on three reels, you enter the free spins mode. Get 10 free spins for the initial combination, and get extra spins for every Trident symbol on the game. Poseidon’s Trident offers up to 102 free spins for multiple appearances.

Multi-Functional Wilds – Poseidon’s Trident and the sea nymphs can replace all regular symbols except treasure chests. The regular wild can appear on the base game and the bonus round, while the stacked wild only appears on the base game.