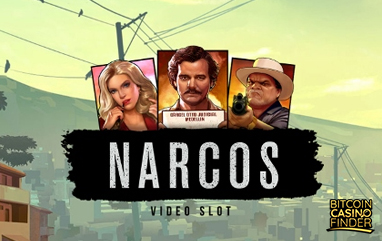 Narcos is one of the most popular, top-rated, and multi-awarded Netflix web television series in the world. Knowing this, Stockholm-based casino game developer NetEnt partnered with French film studio Gaumont to introduce a video slot game based on the series. The Narcos video slot is out this month to offer exciting gameplay and high-paying bonuses.

Leading the launch of the new fiat and Bitcoin slot is Bryan Upton, NetEnt Director of Games: “Since we first announced the deal with Gaumont to bring Narcos to the reels, the anticipation among players and our operator partners has been huge. We are confident that the game will more than live up to its lofty expectations and add an exciting new option to our unbeatable branded catalog”.

As the game is based on a TV series, it will follow the life story of its protagonist, Pablo Escobar. The setting and overall design of the game is set on the streets of Medellín, a city in Colombia known for its wide cartel activities. The backdrop actually highlights an intense battle between the police and the drug lords. The main gameplay, meanwhile, features five reels with three rows and allows players to get winning combinations in 243 ways.

The symbols of the game are some of the main characters in the series, including José Rodríguez Gacha, Connie Murphy, Steve Murphy, and Javier Peña. The last two DEA agents can give you payouts 15 times your original stage for 5 across a full payline. The wild symbol is the DEA badge and has the same value as the department’s agents. It can be substituted for all symbols except for the scatter. Other low-paying symbols are the usual card values J, Q, K, and A, as well as some Narcos-related icons like cash, grenades, machine guns, flamingos, and handguns.

The slot offers many unique and interesting features you wouldn’t see in a traditional slot. It seems like NetEnt has maximized the use of the underlying themes and messages in the TV series and incorporated them in the game. You can trigger the following bonuses and features while playing the game:

Drive-by – can be triggered directly on any random spin. Drive-by can transform random premium symbols into wilds.

Locked up – this functions as a mini-bonus you can activate when 3 or more Locked-up or Pablo Escobar symbols appear on the same row. In the bonus round, you can win payouts 1-10 times your stake.

Free Spins – activated when you land three scatter symbols on reels 1, 3, and 5 on the same spin. It can start from 10 free spins. You can increase it as the game progresses and win up to 1506 times your original stake.