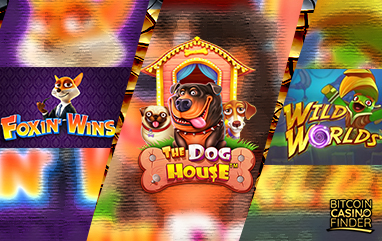 We’re only on the third month of 2019, but we’ve already seen some of the best online games top developers have to offer. Jump starting the month of March are newly released slot games from three well-known casino software providers: NextGen Gaming, Netent, and Pragmatic Play—all of which are packed with new bonus features, interesting mechanics, and fresh graphics.

The Foxin’ Twins slot game is the sequel to NextGen Gaming’s widely popular Foxin’ Wins slot. The main highlight of the new version includes a dual reel set and a new wave of features that can switch or mix randomly, hence the name Foxin’ Twins.

The game can be played on mobile or desktop. It offers random wilds, multiplying wilds, SuperBets, and 200 free spins that can conjure up wins of up to 20,000x your bet. If you hit the multi-bonus feature from your single spin, you can go home rich. Additionally, the SuperBet can impact your bet amount per spin. Level one of this feature will cost double and level two will result in 4x the base bet. Other random features that can be enhanced if you’re lucky are Reveal Wild and Multiply Wild.

The latest masterpiece of NetEnt is its best one yet. More than the gameplay, Wild Worlds introduces a storyline you’ve never seen before in any online slot. It tells the story of three superheroes saving the planet from invading monsters, and you, as a player, is the only one who can control them by spinning the slot and winning the game. While you’re in control, the superheroes are waiting for random bonuses that can lead to wins of up to 2,500x your bet on a single spin.

The Dog House by Pragmatic Play

Pragmatic Play’s newest addition to their portfolio features a dog house filled with all sorts of breeds dog lovers would surely find promising. The set of characters are composed of a Dachshund, Pug, Shih Tzu, and Rottweiler. The dogs roam the reels to give you random rewards of up to 6,750x your original bet.

To play, you’ll have to spin the reels from 0.20 coins and hit wilds on reels two to four in the base game. If you hit the winning combo, you can get a win multiplier of 2x or 4x. If more than one combo is added, it will lead to a maximum win multiplier of 9x.