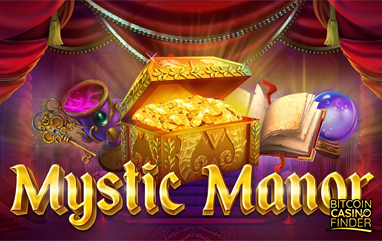 Pariplay is a top provider of Internet gaming systems along with fiat and Bitcoin casino games. To prove its dominance again, the developer has released a new online video slot with exciting prizes and new features. Mystic Manor is now available at your favorite Pariplay-powered online casino.

Leading the launch is Richard Mintz, Commercial and Marketing Director at Pariplay, who shared the features players can experience on the game: “Mystic Manor allows players to experience a game packed with fresh and progressive gameplay features, including the Mystery Card Jackpot bonus, conceived for both mystery and adventure lovers. This array of features, specifically designed to maximize player retention, blend with immersive graphics and a captivating soundtrack to heighten the mansion’s peculiarity and create what is sure to be a big hit amongst video slot enthusiasts.”

Mystic Manor features a magic treasure box that gives rewards to lucky players. The 5-reel, 4-row video slot has a combined theme of divination and treasure hunting. The game’s structure has 5 active paylines and 95.98% return-to-player (RTP) percentage. You can start playing with bets between 20p and £200 per spin.

The regular symbols all pay 0.75, 1.25, or 5 times your original stake if you land 3, 4, or 5 of the same kind on a single payline. The gold coins act as the wild; it can replace all standard symbols except the scatter.

Mystic Manor carries some of the most unique bonus features in Pariplay’s Bitcoin slot selections. You can trigger the following features:

Random Wilds feature – once you triggered the treasure chest, you can get up to 9 extra wild symbols on the reels.

Wild Swap feature – the game will choose 1 random symbol for the wild to replace. All symbols of the same kind will then transform into wilds.

Reel Nudge feature – once you triggered the magic treasure chest again, it can form winning combinations on 1-5 reels.