Pariplay Dives Underwater With King Of The Trident Slot 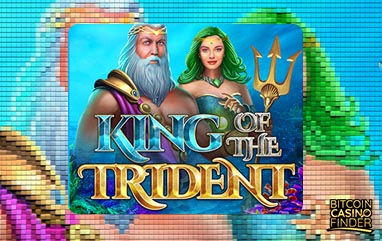 Pariplay Ltd., one of the leading Bitcoin slots developers, taps into the world of Greek mythology just in time for the summer months with their new slot release. King of the Trident online video slot is now out on Pariplay’s platform and partner fiat and Bitcoin casinos to offer free spins, endless re-spins, and 972 winning combinations.

The game’s public launch was led by Richard Mintz, Commercial and Marketing Director at Pariplay, who shared the game’s features and Pariplay’s plans to release more titles in the future: “We have now implemented a schedule that will deliver twice-monthly game releases, including King of The Trident, which follows hot on the heels of Gold’orado. The King of the Trident game also continues our commitment to sending players on unique gameplay adventures, which in this case means diving into Poseidon’s kingdom and taking advantage of our Giant Re-Spin feature.”

From the title itself, King of the Trident will feature Poseidon and other fictional underwater creatures from Greek mythology. The background, graphics, and music are packed with a fresh combination of underwater voyages and sea creatures. The game braves the ocean and its deepest cores, so players can get an out-of-this-world experience.

King of the Trident features a 3×3, 2×6 reel layout. It’s broad but not confusing. The good thing about the layout is that it allows players to hit multiple payouts from its pool of 972 winning combinations. The game also has a whopping 96.02% return-to-player (RTP) rate and can be played in more than 20 languages.

The symbols for King of the Trident include the god of the sea, earthquakes, and horses himself. Poseidon gives the highest payout and biggest winning combinations. The deeper you go underwater, you’ll meet other sea creatures that offer low to medium payouts such as dolphins, mermaids, octopusemayas, and seahorses.

Once you immerse yourself in the underwater world of King of the Trident, you’ll get different bonus features. You can trigger the following with the right symbols and combinations:

Giant Re-Spin – when the first three reels merge into one giant reel, you’ll activate the Giant Re-Spin. You can re-trigger the feature by manipulating reels 4 and 5.