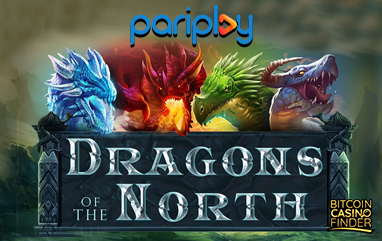 After making the headlines with its new partnership with BF games, highly regarded iGaming services provider, Pariplay, launches another product for online slot lovers. Dragon of the North heads to the software provider’s list of titles and various partner fiat and Bitcoin casino as well as land-based casinos to bring players to a fantasy world they’ve never seen before.

Spearheading the launch is Pariplay’s Brand Commercial and Marketing Director Richard Mintz: “We’re very excited about Dragons of the North, which is a worthy follow-up to the incredible success of the Rumble Rhino slot that we launched in March. These games are each representative of our commitment to crafting engaging experiences with innovative gameplay features. In the case of Dragons of the North, we’ve included a special feature where each reel has its own prize, which changes with each spin.”

The game is a 5 reel slot with 50 paylines. Players can start playing from just 50p per spin on desktop, mobile, and tablet devices. Its rich fantasy graphics complement the game’s atmosphere as it features a colorful medieval landscape.

In the reels, there will initially be 4 dragons to begin the game. The special Dragon’s Egg symbol serves as the wilds in the base game and free spins. It can add a multiplier of up to 10x your initial stake and can earn you the prize in the meter on the same reel. Stacked wilds using the Dragon’s Egg symbol can give you better payouts and prizes if used strategically.

The most important feature the software provider took the liberty of adding is the Dragon’s Egg and its corresponding rewards. Once the symbol appears, you can get rewards like cash prizes, 10 free spins, additional 2 free spins, and one of the four jackpots ranging from x15 to x1000. On top of that, you also have a chance to spin the special Jackpot Wheel and receive mini, minor, major, and grand rewards.

Another set of features to pay attention to are the Stacked Wilds and Reel Tilt features that can give players random reel tilts with extra rewards. These random reel tilts happen when two stacked wilds land on the same reel, followed by an up or down movement to form three stacked wilds. If you’re not lucky enough to earn the previously mentioned bonuses, you can always land random multipliers that can increase prizes your current spin by x2, x5, or x10.