Play’n Go Goes Sinister With Rise Of The Dead Slot 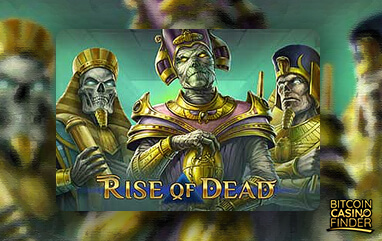 Play’n Go just released another fiat and Bitcoin slots title that will keep you on the edge of your seat. Rise of the Dead, a sequel to the Egyptian-themed slot Book of the Dead, is now available online. It follows the recent release of fantasy slot games The Sword and the Grail, Battle Royal, and Rise of Olympus.

Johan Törnqvist, Play’n Go CEO, headed the launch of the game. Törnqvist emphasized the company’s fascination with fantasy and the supernatural: “Egyptian history and mythology is a very popular subject matter be it in films, TV or games. We always aim not only to do justice to the source of our games inspiration but also to bring a different element to it, something that people may not be familiar with or haven’t seen before. It’s this that separates our games from many others in the market at the moment and is a testament to the creativity of the company when it comes to creating entertainment.”

Play’n Go is one of the leading software providers of online slot games with unique themes. That’s why it’s not entirely surprising that Rise of the Dead features Egypt’s history, particularly the part where pharaohs and mummies roam the continent.

The slot has 5 reels and 20 active paylines. It can be played on any devices from 20p to £100 a spin. The game functions with ancient symbols based on the real figures from the Egyptian culture, such as the Scarab beetle, Thutmose, Amenhotep, and the Book of Thoth. The popular figures are high-value symbols, while the low-value symbols include the card suite A, K, Q, J, and 10.

The Scarab beetle is the wild symbol. It can replace all symbols—except the scatter—and give players a multiplier worth 125 times their stake for 5 on a payline. The pharaohs can grant you multipliers if you trigger them on the bonus features.

The Rise of the Dead has more bonus features than the Book of the Dead. While playing, you can trigger the following to make more winning combinations:

Mega Stacks feature – one symbol will be randomly chosen to fill 12 consecutive spaces on the reels. This can help you make winning combinations.

Gift of Gods feature – Mega Stacks triggers the Gift of the Gods features randomly. When this happens, you can get bigger payouts with high-value symbols.