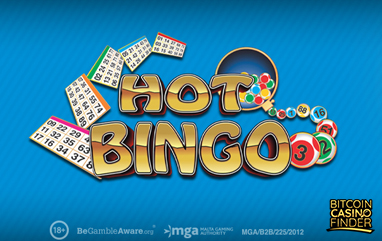 Play’n Go is one of the leading supplier of fiat and Bitcoin slots in the online casino industry. While partnering with top-rated casino platforms, they released a handful of smash hit titles this year alone. But as the year ends, the company chooses to go out of its comfort zone and release a set of new fiat and Bitcoin bingo titles. Play’n Go teamed up with RCT Gaming to bring Hot Bingo, Super Bola, Flex Bingo, and Park Bingo to life.

In the official site’s announcement, Play’n Go explained their decision to come up with new casino titles on top of their slot releases: “Video bingo has always been a huge pastime in the LatAm region and the advent of video bingo over the years has only served to make the game even more popular throughout the continent, and we’re glad to be bringing a Play’n GO version to the market!”

With medium volatility, Hot Bingo offers a maximum of 166,280,26 win exposure. The game allows players to play bingo with four cards. Each card has 15 numbers ranging from 0 to 9, but no card contains the same set of numbers. The game will draw 33 random balls to release the winning patterns.

This medium-volatility bingo game features an interesting twist on Latin America’s Lotería or Bola games. Players can also use four cards in Super Bola. Each card has 24 numbers and 1 “free space”. 44 regular balls will be drawn to reveal the winning patterns.

Perfect for new gamblers, Flex Bingo has low volatility and 144, 000 maximum win exposure. Players can use up to four bingo cards in one game. Each card contains numbers between 0-90, no duplicate. 30 balls will determine the winning numbers. Extra balls can be triggered if the cards are only one ball away from winning or the game grants random rewards.

Low-volatility Park Bingo can be played with four cards containing 15 random numbers each. The numbers range from 0 to 90, the same as the 90-ball pool that will determine the winning patterns later on. Only 30 balls will be released from the pool, but players can get extra balls by buying ten or more balls or reaching the 8x credit pattern.