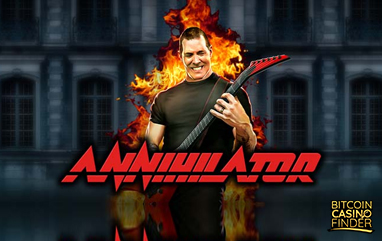 Top software provider in the industry, Play’n Go, continues to surprise stay-at-home players with their new slot releases. This week, the developer released Annihilator, its latest music-themed slot dedicated to the band of the same name.

Play’n Go aims to release fiat and Bitcoin slots that can generate wide appeal from music fans and casino enthusiasts in different territories. Annihilator is the latest title on the list to fulfill that duty, that’s why Play’n Go CPO Martin Zettergren is enthusiastic about this collaboration:

“There was a real collaborative effort to give this game its level of realism and detail, which included visiting Jeff’s UK studio to capture the voice and video recordings; we worked together every step of the way…Music fans will love the nods to their iconic songs, albums, and characters throughout the game. At the same time, slot lovers will enjoy the fabulous gameplay and the variety of unique features that the game contains.”

Annihilator is a themed-slot dedicated to a Canadian thrash metal band of the same name. Led by guitarist Jeff Waters and vocalist John Bates, the band was founded in 1984 and earned global popularity from the late 1980s and early 1990s. They are referred to as one of the “big four” Canadian thrash metal bands, and their two studio albums—Alice in Hell (1989) and Never, Neverland (1990)—are two of the most influential Canadian heavy metal records in history.

Fun Palace – lock in the abandoned doll symbol on reels 2, 3, and 4 and the Fun Palace bonus feature triggers instant prizes.

Set the World On Fire Free Spins – trigger free spin when 3 scatter symbols land anywhere on the reels. Get an additional 8 spins if Jeff Waters wild symbol appears in the game.