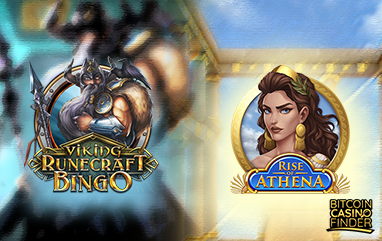 Play’n Go markets two of its most advanced titles coming to online casinos and Bitcoin casinos this month. The dual release of Rise of Athena slot and Viking Runecraft Bingo marks the developer’s continued success deep into the fourth quarter of 2020.

Both new titles are now available at Play’n Go’s partner casinos. With only weeks to go until the year ends, Play’n GO and its live casino team vowed to enter the new year in a strong position and dominate the market with the help of Rise of Athena and Viking Runecraft.

“This isn’t the first time we’ve had multiple releases on the same day; we have built ourselves into a position where it is well within our capacity to deliver more than one high-quality title into the market simultaneously. Of course, these are two different games giving two different experiences, giving more new options for operators to entertain their players, and that’s what it’s all about,” Play’n Go CPO Martin Zettergren said in a press release.

Athena, the Goddess of War and the daughter of Zeus, is one of the most popular and cunning figures in Greek mythology. Play’n Go made sure to capture her spirit and wisdom in the Rise of Athena slot.

The game has 5 reels, 3 rows, and 10 fixed paylines. Play’n Go’s member casinos can deliver the game with a 96.20% RTP and high volatility. The Goddess, along with other divine symbols in the game, are housed in a temple-like structure set against a light blue Aegean sky. Players can make winning combinations using Athena herself, the Pegasus, scrolls, smoky jars, plumed helms, and royal cards.

Viking Runecraft Bingo is one of the premium titles in Play’n Go’s portfolio of video table games. Featuring Norse mythology, the game highlights the power of Odin, Thor, Freya, and Heimdall through patterns and bonus features.

Players can activate up to 4 cards in the game. Each card can be put into motion using the on/off buttons beside it. Once the cards are ready, 30 balls will be drawn from a total of 90 balls. Winning combinations will be shown on the cards.

All pattern prizes will be awarded when there are multiple patterns achieved on one card. But players can achieve the highest pattern prize if any pattern is completely covered by the higher paying pattern. Lucky players can hit jackpots up to x4000 the original stake.