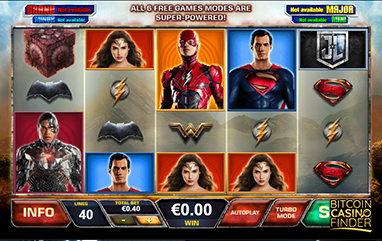 The fiat and Bitcoin slots game is just in time for the release of the movie this past week after partnering with Warner Bros. Pictures to launch the new slot game. Justice League is DC’s attempt to compete with the record-breaking box-office hit Marvel’s Avenger. This is why the DC movie is a good theme to base a slot on, especially since the movie features big screen actors portraying the iconic superheroes, Batman, Superman, Wonder Woman, Aquaman, and Flash. In the Playtech-developed slot, familiar faces include Henry Cavill, Gal Gadot, Ben Affleck, and other celebrities dressed in their respective superhero costumes serve as game symbols.

Justice League slots present 5 reels and 40 paylines, which is included in Playtech’s progressive jackpot for a chance to win a share from a cash pot prize. Luckily, there are bonuses included when playing the Playtech slot where you’ll receive Bitcoin free spins. More bonuses mean more chances of winning. Additonally, players also get free bets whenever your favorite hero symbol comes out on the reels. The Batman symbol only gives you 2 free spins, the Superman symbol gives 5 free spins, Wonder Woman symbol gives 7 free spins, Aquaman gives 10 free spins, Cyborg gives 12 free spins, and The Flash gives a whopping 15 free spins. But, the Bitcoin bonuses don’t stop there. When any of the superhero symbols come out on the reels, they will turn into wild symbols and help you combine more winning paylines. To end the bonus list, the game is included in the DC Super Heroes Bitcoin Jackpot games Network. With this, players may win–when playing any of the four included games–after entering into the jackpot game.

But as much as the game has enticing bonuses and promotions, Justice League slot is a variance game. Variance games have inconsistencies with winning and losing streaks. In this slot game, you could lose rounds consecutively but can also win rounds after another. Keep in mind that variance games are better played with a bigger bankroll ratio.

Nonetheless, whether you’re in it for the fun or the rewards, Justice League slots can satisfy your desires. Summon your inner child and assemble the deadliest combination of superheroes for more winnings!