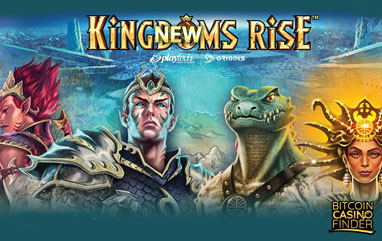 World-renown online casino developer Playtech knows that there’s still a lot to be done in the remaining weeks of 2019. With the help of its subsidiary company, Playtech Origins, Playtech launches a fiat and Bitcoin slots suite with three variants: Kingd0 oms Rise.

“Innovation is always at the forefront of Playtech’s games development process and, in Kingdoms Rise, we are proud to be delivering an industry-first concept for players and licensees alike. The suite’s token system gives players the power of choice like never before – they decide what feature to play when to play it and in which game. Some players may want to try a feature as soon as they have enough tokens; others may prefer to build up a balance and play several features at once. The key point is, the choice is theirs,” said James Frendo, Director of at Playtech, in a press release.

Kingdoms Rise is a European fantasy-themed suite, a nod to the roots of most Playtech titles. The game’s objective is to let players discover the secrets and wonders of the three games from the suite: Sands of Fury, Guardians of the Abyss, and Forbidden Forest. The layout for each game provides a crisp graphical representation of matriarchal warriors in Europe’s history.

Following the myths representing each game, Playtech Origins made use of the following symbols to offer medium to high payouts: gods, reptiles, swords, gems, fairies, and other mythical creatures.

The suite has three different games, but the symbols are their common denominator. We can mostly see their differences in the layout. Sands of Fury has 5 reels and 20 paylines; Guardians of the Abyss has 5 reels and 25 paylines; Forbidden Forest has 5 reels and 576 paylines. Regardless of the betting range and variant, all players have a chance to bag the game’s jackpot and bonus features.

Kingdoms Rise suite comes with three games, so you’ll surely find your luck on any of the three variants. Here are the highest-paying rewards you can trigger:

Wild Vortex Respins (Guardians of the Abyss) – the Vortex wild symbol on the game triggers the re-spin feature. Land one symbol on any reel to get re-spins and 3 extra wilds.

Owl Re-spins (Forbidden Forest) – when you land 3 warrior symbols on any reel, you’ll get 12 re-spins.