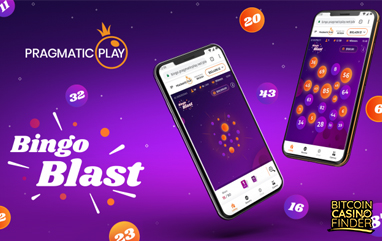 Introducing the fresh title on the shelf is Claire McDaid, Vice President of Bingo at Pragmatic Play. McDaid announced the launch of the game yesterday on Pragmatic Play’s official news site: “Bingo Blast is the latest addition to our collection of innovative games and its high-velocity gameplay makes it a force to be reckoned with. Featuring engaging visuals and the well-crafted gamification for which we are renowned, it’s classic bingo for modern times and I know it will be a huge hit with players.”

As Bingo Blast aims to bridge the gap between classic bingo lovers and Bitcoin bettors, it offers modern and traditional bingo features that work well on mobile or any portable devices. Desktop users are welcome to play, but Pragmatic Play specifically enhanced player experience on mobile. Bingo Blast is 3-4 times faster than an average 90-ball bingo variant online or at brick-and-mortar casinos.

Like traditional Bitcoin bingo, players have to buy tickets at Pragmatic Play to join Bingo Blast. Tickets are available at the quick-and-easy purchase panel on the website. After purchase, the game immediately begins.

The first ball drawn or ‘first blast’ opens the game. It is backed by an impressive animation of balls exploding across the screen. From the explosion, the game highlights the numbers chosen by the player. Afterward, players need to wait for the second blast before proceeding to the final round. Between the first and second blasts, players can still check their tickets and wager as the initial numbers are automatically checked off. In the last round, the game will continue to release balls in a fast-paced manner until the winner is declared.