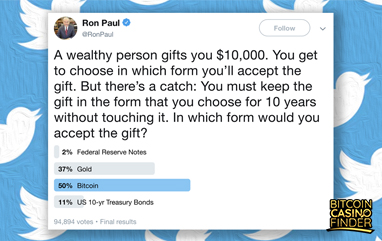 Everybody knows Ron Paul as the former U.S. Representative for Texas’s 22nd congressional district, but he’s more than a politician. Paul has also been associated with economics as he endorses several laws and principles regarding free trade, taxes, and tariffs. And because of his great contributions to the political and economic areas of the United States, he’s also quite popular in the Twitter community.a

A wealthy person gifts you $10,000. You get to choose in which form you’ll accept the gift. But there’s a catch: You must keep the gift in the form that you choose for 10 years without touching it. In which form would you like to accept the gift?

Over 94,894 users participated in the poll, and the majority have chosen Bitcoin. 50% answered they prefer to get a $10,000 dollar worth of Bitcoin instead of Federal Reserve Notes, Gold, and US 10-yr Treasury Bonds.

The result is surprising since Paul actually conducted the same survey in December of 2017 with relatively similar results. This time around, Bitcoin received 4% more votes and the US. dollar scored the same. Bitcoin’s price at the time of the first survey was around $11,500 and was set to reach its highest price of $20,000 last year. This November, Bitcoin has been stable until it diminished in value and had lost over 20 percent one day before Paul started the poll.

The survey remains proof that despite the current market’s volatility, there are still people warming up to Bitcoin. According to analysts, Bitcoin might take weeks or months to get back on track. Some even claimed that the coin’s price could reach its highest mark by the end of the year.

Bitcoin continues to sit in a volatile market today. Other cryptocurrencies are also crashing lately. At press time, Bitcoin is priced at 5,500.36 dollars. It can recover quickly when the market trends and other cryptocurrencies face a positive trajectory. The price could go higher towards $5,700 or 5,800 and may face a strong selling interest.