Separation Of Blockchain And Bitcoin: An Ongoing Conflict 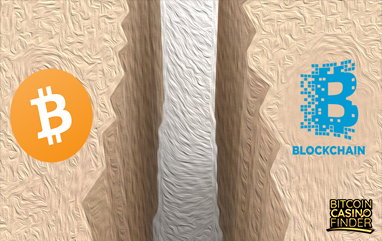 The launch of Bitcoin almost a decade ago introduced to the world the concept of the blockchain technology. You may have heard of it yesterday or the other day since these two innovations contribute to the yearly revenue of different industries and organizations including online casino, real estate, insurance agency, and charity.

For those asking what is Bitcoin, it is a decentralized currency and payment system that allows peer-to-peer transactions, many investors use it because of its fast, tax-free, and anonymous transactions. The blockchain, on the other hand, is the underlying technology that supports the creation and transaction of cryptocurrencies—but it doesn’t stop there, the blockchain technology can be used in any industry to verify proof of ownership; track intangible assets like copyrights, trademarks, and other intellectual properties; and increase the safety of financial transactions. With these bugging differences, the question “can we finally separate the blockchain from Bitcoin?” emerges.

A handful of important people in the financial industry expressed their insights regarding the eyeing of the separation between the two. The most insightful ones are from the China Renaissance and Netcoins.

Fan Bao, THE CEO of investment bank China Renaissance, claims that Bitcoin is a bubble and the separation should happen. He stated, “I think we have to separate Bitcoin from the blockchain. I think that the blockchain is very exciting technology, probably the most disruptive technology in our industry, the financial services industry.”

CEO of Netcoins, Michael Vogel, shared his opinion regarding safety tradings while using Bitcoin and the blockchain. He said, “Digital money has been attempted before, and the reason those attempts failed is due to not having the decentralization that the blockchain offers. The blockchain and cryptocurrencies are intimately connected, and both technologies are destined for massive success and impact akin to the growth of the Internet itself”.

IN THE PERSPECTIVE OF ONLINE CASINOS

Financial experts suggested that online gambling should require the support of blockchain and cryptocurrencies more than any other industry since the combination of two guarantees the protection of players’ money before a bet is placed, and secures the fair generation of betting odds and results. But should Bitcoin be still included in the picture? The answer is yes, because if it had not been for Bitcoins, casino players may have never seen the power of the blockchain. The two should continuously work hand in hand to fulfill safe and decentralized transactions as well as offer quality and reliable Bitcoin games despite the ongoing issues and debates.