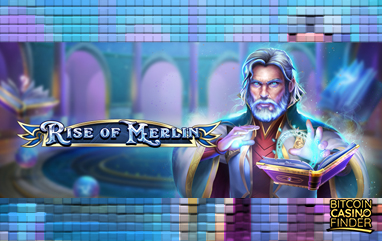 Play’n Go, supplier of fiat and Bitcoin slots games and various casino offerings, released a new fantasy title this month. The Rise of Merlin, their latest title, is now available online and is likely to become another smash hit in 2019.

This game marks the company’s first Arthurian-based game. Play’n Go is known for featuring popular and interesting themes and figures, but CEO Johan Törnqvis confirmed that they are not after the hype when they released the Rise of Merlin: “We’ve released games based around many popular ideas and themes; for instance Ancient Egypt, Vikings and space aliens. However, we make sure that the game suits the theme, rather than just trying to jump on something popular for an initial buzz and, if you look at games like Legacy of Egypt and Viking Runecraft, you’ll see that our stance has worked.”

The Rise of Merlin is a 5-reel video slot with 10 active paylines. The minimum bet is $0.10, and the highest betting value one player can place is $100 per spin or $10 per line. Huge awards await lucky players, and the biggest prize highlights a 5,000x total stake.

The game’s plot and theme follows the story of the legendary medieval figure Merlin, a wizard and enchanter featured in Arthurian legends. The backdrop displays an animated version of the wizard’s chamber, and the symbols are items and figures from the legends. Merlin himself represents the top symbol, which triggers payouts 1, 10, 100, or 500 times the original stake for 2, 3, 4, or 5 across paylines, respectively. The mysterious crystal ball acts as the scatter and wild symbol, while other magical items like dragons and owls are the medium-paying symbols. Meanwhile, the card values A, K, Q, J, and 10 are the low-value symbols.

The game resembles classic features of Play’n Go’s popular slot titles, but the Rise of Merlin makes things more interesting with its bigger rewards and payouts.

Here, you’ll see the well-loved “Gamble” feature of Play’n Go. This feature grants players the chance to double, triple, or quadruple their winnings by picking the right color or the right suit of a face-down card. This works for low-value and mysterious symbols.

Another bonus feature is the extra spins round which players can trigger via special expanding symbols chosen at random. You can win more rewards during each round, and it can be retriggered again and again if you can activate 9 expanding symbols.